Chat with us, powered by LiveChat
We are hiring - click here to see our vacancies -> 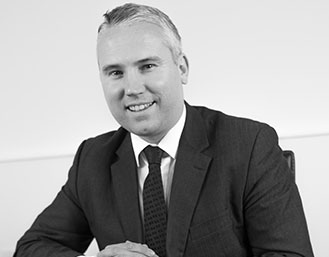 Ross is one of our two Directors within the Criminal Court Department. He is primarily the Director in charge of our office in Cambuslang however also operates from our Glasgow City Centre office.

Ross is a Solicitor Advocate with extended rights of audience allowing him to appear in cases before the High Court of Justiciary, Court of Criminal Appeal and the United Kingdom Supreme Court. He is often instructed by other firms of solicitors to conduct complex High Court trials.

Having undertaken a Traineeship with the firm in 2001 Ross was assumed as a Partner in 2007. He is involved on a daily basis conducting business in the High Court, Sheriff Court and JP Courts in Glasgow and elsewhere throughout the country.

He has extensive experience of conducting criminal trials and is instructed daily to prepare and present complex criminal cases. These range from road traffic offences to matters prosecuted at high court level. Ross spends much of his working day in court appearing on behalf of accused persons who find themselves in need of specialist advice at difficult times in their lives. His client base ranges from young, vulnerable accused to business men and women needing very specialised advice.

In addition to matters within the firm Ross currently holds the following external positions:

President of the Glasgow Bar Association 2013/2014. The largest representative group of lawyers in Scotland.

Member of the GBA Executive Committee since 2009.

Council member of The Royal Faculty of Procurators in Glasgow since 2013.

Scottish Legal Aid Board Quality Assurance Peer Reviewer (involves the reviewing of files held by other solicitors firms to ensure quality of service offered) since 2013.

£1million worth of jewellery stolen from Edinburgh store ROX during raid